The Mariners rate as the fourth best team per FanGraphs’ projections. However, cracks in the offense leave them ranked 10th here at Fantasy Baseball Café. The lineup is an improvement over past iterations of Seattle’s offense. Depth is a concern, and their best hitters are trending in the wrong direction.

The pitching staff is one of the best in baseball. The M’s have a deep rotation ranging from the King to top prospect Taijuan Walker. The bullpen is deep with closer capable relievers possibly extending into the minor leagues. 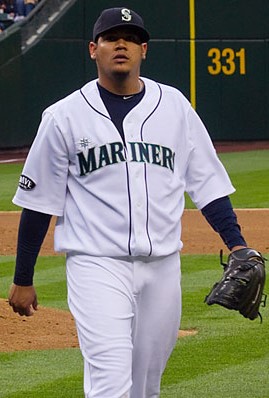 The latest out of Mariners camp is that the club could use a modified six man rotation this season. In all probability, an injury will abort those plans before long – it’s the nature of pitching. The decision does make sense for most of the staff. Some worry about Iwakuma’s durability. Paxton and Walker are relatively young. Neither pitcher has thrown over 150 innings in a season.

The NFBC crowd views Hernandez as the second best pitcher in baseball. His average ADP is 14th overall. He’s well worth the big price tag, so long as you can justify the opportunity cost. Jose Altuve, Anthony Rizzo, and Adam Jones are selected immediately after Hernandez. The NFBC format inflates the value of top pitching, so he’s going slightly later on other sites.

His five pitch repertoire with advanced command and control ensure continued domination when healthy. If there’s one red flag, it’s that he’s worked 1,976.1 innings since his age 20 season (9 years). If the Mariners use the six man rotation, expect Hernandez to continue working every five days.

Iwakuma is a command and control pitcher who might be a slight value. He’s the 100th pick in NFBC. He posted a 3.52 ERA with 7.74 K/9 and 1.06 BB/9 last year. He attacks with early count sinkers before turning to a plus fastball, slider, and splitter mix. His fastball features elite peripherals despite just brushing 90 mph. He’s an extremely consistent pitcher, although he’s a slightly higher health risk than the average hurler.

Paxton leans on a 95 mph fastball that plays like a sinker. He also features a curve, changeup, and slider. The curve is nearly elite, and he uses the changeup frequently. He managed a 3.04 ERA in 74 innings last year with 7.18 K/9 and 3.53 BB/9. He has the necessary stuff to take another step forward, but it’s hard to predict if or when that may happen. He’s the 58th pitcher off the board – right around Jake Odorizzi and Dallas Keuchel.

After scrapping a lousy cutter in favor of a full blown slider, Walker has railroaded the spring competition. In recorded action, he’s pitched 18 innings with 19 strikeouts, four walks, six hits against, and no runs allowed. He has the stuff to strikeout a batter per inning with plus ratios. ADP data is no longer relevant for Walker. His spring performance has him leaping up the draft board.

It appears that Walker’s spring dominance will push Roenis Elias to the sixth starter role. Unlike Tanner Roark or whoever loses the Indians rotation competition (probably Josh Tomlin), Elias might be given the opportunity for semi-regular work. His curve is a plus-plus pitch, although his fastball is a modest liability.

Erasmo Ramirez and Danny Hultzen are also on the radar. Unless Ramirez steals the long relief role, the club will be forced to trade him. He’s out of options and will definitely be claimed off waivers. Hultzen was once a top prospect, but he’s missed most of the last two seasons with shoulder woes. Anything the club gets from him is a bonus.

Fantasy owners don’t trust Rodney – he’s the 16th reliever off the board despite a 48 save season. He’s unusual for a closer in that he throws a sinker and change as his primary pitches. Last year included a 2.85 ERA with 10.31 K/9 and 3.80 BB/9. Expect more of the same in 2015. When he gets into trouble, it’s usually via the walk.

If Rodney stumbles, Farquhar and Wilhelmsen are there to pick up the slack. Lord Farquhar offers elite ratios, so he might be worth a stash pick if you have room. His 2.66 ERA, 10.27 K/9, and 2.79 BB/9 should be welcome on most fantasy rosters. Wilhelmsen has past experience in the ninth inning. He allows too many walks, so he’s much less likely to serve as the second string closer.

Due to Coors Field, the Rockies can’t sign top free agent pitchers for any reasonable amount of money. In some ways, the Mariners have the same problem with hitters. Safeco Field has a tough reputation for hitters. The club has done what it can to make Seattle more alluring by spending big on Robinson Cano. That probably helped the team lure Nelson Cruz.

As one of the top talents at a bottom heavy position, Cano is a popular early pick at 20th overall. While the price may prove to be reasonable, owners hoping for a rebound in power will be disappointed. The move from hitter-friendly Yankee Stadium to Safeco explains most of the 13 home run decline from 2013 to 2014. Expect another season in the vicinity of 85/15/80/8/.310.

Given Cano’s drop in power, might we expect a similar result from Cruz? After all, he’s moving from a homer haven in Baltimore where he posted a career high 40 blasts. In his case, I’m less concerned about the stadium than plain old regression. Cruz will turn 35 during the season. I would have expected about 25 to 30 home runs at a neutral ballpark. When healthy, he’s still a useful fantasy option. He’s the 21st outfielder off the board, which is too early for my taste. However, if you’re in a league with a lot of SABR-friendly folks, he might become a bargain.

If you’re looking for value plays, try Mike Zunino, Austin Jackson, and Brad Miller. Due to his power at a weak position, Zunino could be a top 10 catcher. Even while hitting a miserable .199/.254/.404, he blasted 22 home runs and drove in 60 runs. I anticipate a modest improvement in his average and terrible 33 percent strikeout rate. The overall picture isn’t pretty, but he’s available around pick 220.

Miller was one of those not-sleepers last year. A five category profile had everybody drooling over the potential. Instead, his flaws were quickly revealed and the stolen bases never materialized. An injury to Chris Taylor ensures that he’ll play frequently in April and May. If you’re in need of a backup middle infielder late in the draft, he’s a reasonable option.

The Mariners are the 10th team in our power rankings. The offense has some useful pieces, including a few sleepers. However, the unit profiles as merely adequate. Combined with an excellent pitching staff, the M’s are primed for their first playoff run in years. They’ll still need to edge past the Athletics and Angels in a difficult AL West.