To some, the Padres were the winners of the offseason. GM A.J. Preller aggressively converted most of the farm system into a win-now major league lineup. The rotation has both depth and talent, the bullpen has at least five pitchers who could close games, and the lineup has right-handed power.

The modest win projection can be pinned upon one critical flaw – defense. The new look outfield will be strained in cavernous Petco Park. Wil Myers might manage to play a passable center field. He might not. Justin Upton and Matt Kemp certainly can’t cover the position. The infield defense is even scarier if Clint Barmes doesn’t start. He’s not much better at hitting than a pitcher, so there’s some pressure to use Alexi Amarista as the starting shortstop.

Undaunted by an already full rotation, the Padres signed Big Game James to front their rotation. Shields and his 5.46 postseason ERA was the butt of many jokes during the Royals title run. Despite the negativity, he remains a valuable horse in both reality and fantasy.

He’s being selected 96th overall. A move to spacious Petco Park and the National League should be a boon, although that’s mitigated by the Padres atrocious defense. He posted a 3.21 ERA, 7.14 K/9, and 1.74 BB/9 last season. The strikeout rate is a little weak from an “ace.”

Ross is one of my favorite pitchers to watch. He throws a 94 mph bowling ball sinker which he complements with a fastball, above average change, and plus slider. Nearly 40 percent of his pitches are sliders – a health risk to his elbow. At his best, he is unhittable. A 2.81 ERA, 8.97 K/9, 3.31 BB/9, and 57 percent ground ball rate hint at his ability to overwhelm the competition.

However, I’m concerned about 2015. The Padres had excellent defensive catchers in 2014. They’ve downgraded to Derek Norris and Wil Nieves. Their pitch framing skills don’t hold a candle to those of Yasmani Grandal and Rene Rivera. I worry that Ross requires superior pitch framing. His sinker and slider have so much life that they often look like balls even when they catch the plate. If the framing isn’t up to snuff, the opposition will learn to sit back and wait. Keep an eye on his walk rate.

As a professional, Cashner has never started more than 26 games in a season. I recall advocating for him to remain in the bullpen back in 2012. He’s proven me wrong in one sense by showing solid results out of the rotation. His ability to pitch a full season is still in question. Cashner uses a sinker to induce weak contact, but it also kills his strikeout rate. His fastball, slider, and change could support about a strikeout per inning. Too bad for fantasy owners. Most would trade a handful of runs for a spike in strikeout rate.

Plenty of depth waits in the wings. Brandon Morrow may get the first look as the fifth starter since Odrisamer Despaigne still has options. Josh Johnson is rehabbing (again). Matt Wisler is a major league ready prospect. Given Preller’s disposition, he’s liable to be traded during the season.

All four names have some degree of fantasy utility depending upon their role. Despaigne is my favorite even though he’s just a junk balling spot starter. Who doesn’t love junk ballers? Morrow and Wisler probably offer the best fantasy utility of the quartet.

The Padres might possess the deepest bullpen in baseball. Benoit is an excellent ninth inning option, but he’ll turn 38 during the season. Last year, he posted a 1.49 ERA, 10.60 K/9, and 2.32 BB/9. He relies upon a 95 mph fastball, hard slider, and elite splitter. In 2014, batters whiffed on 40 percent of swings against the slider and 60 percent of swings versus the splitter.

If age or injury forces a change, the Padres have no shortage of options. Maurer looked fantastic in relief for the Mariners. There’s talk of using him as a starter, but I don’t see how they’ll have that opportunity. Kelley is a slider happy righty similar to Sergio Romo or Luke Gregerson. Quackenbush is a more typical reliever. He was used as the emergency closer late last season. 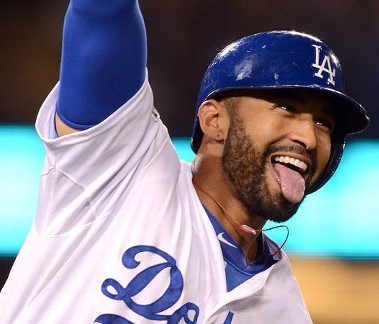 Fantasy owners have ignored Padres hitters for years. Aside from unexpected blips from guys like Will Venable, the team rarely produces much fantasy value. The new look Friars should provide at least some production.

Matt Kemp is viewed as a linchpin for the offense. The Dodgers dumped a portion of his albatross contract over the winter. Word on the street says Kemp is reinvigorated with his new club.

Few players come with as much as uncertainty. He’s the 16th outfielder off the board. He could easily justify that cost with 30 home runs, 10 stolen bases, and strong run production. Or his arthritic hips could reduce him to Alex Rios or Khris Davis. He’s the wrong kind of risk in my opinion.

Kemp’s new teammate Justin Upton is going a few picks earlier. I’m less concerned about a sudden collapse from Upton. While Petco Park is very pitcher friendly, it’s not remarkably different from Turner Field for right-handed hitters. Expect another season of 25 to 30 home runs from the 27-year-old. Keeper league owners should remember he’s a free agent after the season.

In the majors, Wil Myers has struggled to tap into the high quality contact that made him a top prospect. A .222/.294/.320 line last season led the Rays to sell while it was still possible. Myers, 24, still has plenty of time to develop at the plate. Expect growing pains this season, which is why I prefer alternatives like Melky Cabrera and A.J. Pollock.

If you’re looking for a sleeper, turn to Jedd Gyorko. He burned fantasy owners last season, but he looked much better upon returning from plantar fasciitis. In the second half, he hit .260/.347/.398. There’s upside for even better production. He could be the second base version of Kyle Seager with fewer stolen bases. He could also be a lot less. Players become post-hype sleepers for a reason.

The Padres were one of the busiest clubs this offseason. They place 18th in our power rankings. Their perennially crummy team has transformed into the belle of the ball. Well, maybe just a belle at the ball. The club could contend in the NL West, but they still face an uphill battle.

The rotation is a strength, and the lineup should provide run support. Defensive metrics expect a disasterpiece, which could sink the season. At the very least, the club should engage its fan base.