After decades of desolation, the Pirates have pieced together a perennial contender. The lineup is a big strength. Not only are the hitters dynamic, they also supply excellent defense. That allows the mediocre pitching staff to play up. PNC Park is extremely pitcher friendly, which also helps the pitchers. The NL Central may be the hardest division in baseball, so the Pirates will have their work cut out for them.

Like many of the best clubs, Pittsburgh has excellent depth and roster flexibility. The acquisition of Jung-ho Kang should allow the team to use utility man Josh Harrison like Ben Zobrist if needed. The club once again found a good, undervalued catcher to help guide the pitching staff.

Liriano has been frustrating fantasy owners since 2006. The lefty is capable of greatness, but he also turns in his share of stinkers. He seems to have found stability in Pittsburgh with two consecutive strong seasons. His approach to pitching is predictable but effective. He gets ahead with a high contact sinker. It’s not a good pitch. Once he’s ahead in the count, he pounds away with his plus-plus slider and changeup combo.

His repertoire contributes to a useful mix of peripherals. His strikeout (9.70 K/9) and ground ball (54 percent) rates are helpful. He does walk too many hitters. For him, I suspect the walk rate keeps opponents off balance. As the 55th pitcher in NFBC drafts, his price is quite reasonable.

Cole rates as one of the best growth assets in baseball. The 24-year-old has a 96 mph fastball that contributed to 9.00 K/9, 2.61 BB/9, and a 3.65 ERA. His repertoire is deep and includes five plus pitches. The sinker and change could use further refinement, but the slider and curve are borderline elite. He has the potential to be a top 10 pitcher this season. Unfortunately, fantasy owners have noticed the upside, and they’re selecting him 19th among pitchers.

As long as Worley and Locke are controlling walks, they’re viable stream starters. Their low strikeout rates make it hard to own them outright.

The club has a handful of prospects who could reach the majors, headlined by Nick Kingham and Jameson Taillon. Veteran Charlie Morton is working his way back from a hip injury. He looks to be slightly behind schedule for opening day. Once he’s back, he’ll probably push Locke or Worley into long relief. Clayton Richard is the club’s latest reclamation project, but he isn’t interesting to fantasy owners.

Perhaps the most unheralded reliever in baseball, Melancon has reeled off two consistent seasons with the Pirates. Last year, he recorded 9.00 K/9, 1.39 BB/9, and a 1.90 ERA. He’s especially stingy with the home run ball. He’s allowed just three round trippers in the last two seasons thanks to a ground ball heavy approach.

He’s essentially a two pitch reliever. Mostly, he relies on a 92 mph cutter. The pitch is extremely effective. He’ll also mix in a curve. Fantasy owners have taken notice – he’s the seventh reliever off the board.

If something happens to Melancon, Antonio Bastardo and Tony Watson are the presumed alternatives. Bastardo is a left-handed, fly ball pitcher. He induces a high strikeout rate with too many walks. Watson, a righty, has better command and control of a four pitch repertoire. Most analysts consider him the eighth inning guy. 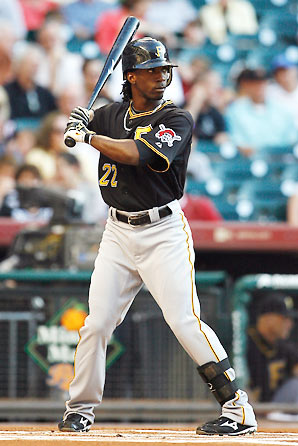 After park adjustments, the Pirates offense was the fourth best in baseball last season. At full strength, they could easily outperform their 2014 numbers.

The club downgraded at catcher once it was clear Russell Martin wasn’t affordable. However, Francisco Cervelli’s skill set isn’t dissimilar to Martin’s. He’s a top pitch framer. Fantasy owners will be more interested in his career .278/.348/.381 slash. He’s struggled with health in recent years, so don’t plan to use him as your primary catcher. For owners in two catcher leagues, he’s an inexpensive option for your second spot.

The outfield is among the best in baseball. Andrew McCutchen and Starling Marte have established themselves as two of the top talents in baseball. Most owners won’t have a shot at rostering McCutchen. Marte is available around pick 35. Depending upon where he bats, he offers a five category skill set.

Farther down the draft board is top prospect Gregory Polanco. After a disappointing debut, his price is relatively reasonable. The 23-year-old has 10 to 20 home run power with 30 steal potential. The overall profile looks very similar to a lower average Marte, and Polanco is available 100 picks later. He’s usually one of the last players with five category potential left on the board.

In the infield, Harrison should help to provide flexibility. Nominally the everyday third baseman, he may be forced to shift around so Neil Walker, Jordy Mercer, and Kang can all stay sharp. While he’s not very patient, he could hit second thanks to a high average. He has 10 to 15 home run power with 20 stolen base speed. The run production will depend upon where he bats, but he should offer at least 4 categories of value.

Kang is a mystery, especially after a rough spring training. Swing expert Dan Farnsworth believes the power should play in the majors. If Kang gets off to a slow start, he could spend some time in Triple-A. He’s an interesting late-round flier if only because he offers 20 to 30 home run upside with middle infield eligibility.

The entire lineup has some fantasy purpose. Pedro Alvarez and Corey Hart could combine to match a mid-tier first baseman. You just need the flexibility to roster both. Prior to the acquisition of Kang, Mercer looked like a nice shortstop sleeper. Walker is coming off a career year, but his price is reasonable at pick 125.

We’re starting to transition to some very good ball clubs. The Pirates are 11th in our power rankings. The club features a dynamic lineup that includes no easy outs, plus defense, and a decent rotation. They have the depth to weather a few major injuries too. This should be one of the most exciting clubs to watch this season.

There are a few value plays like Burnett, Kang, Mercer. Most Pittsburgh players are reasonably priced in drafts. It probably helps that they don’t have a massive fan base like the Yankees or Dodgers.