It feels good to talk about the Yankees as just another baseball team. The skein of immortality has fled the Bronx. Whether this is a temporary setback or a new age of baseball remains to be seen. For now, the club is in a transitional period as it seeks to develop the next wave of Yankee lifers.

Age and bloated contracts aside, the Yankees should contend despite their myriad flaws. The lineup has thump, but it’s anyone’s guess which veteran sluggers will perform and which will bust. The rotation probably has adequate depth even though it’s set to start shorthanded. It feels strange to say this; the Yankees actually have some good value plays. 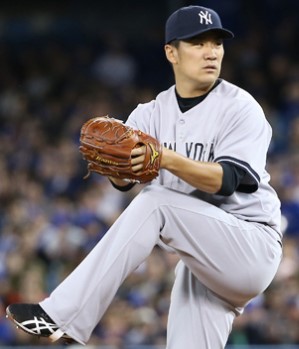 Sabathia’s fastball once worked in the mid-90s. Prior to landing on the disabled list with a knee injury last season, he was down to 89 mph. His repertoire still elicited plenty of whiffs, but hitters were teeing off. He allowed a .297/.346/.528 line despite good peripherals – 9.39 K/9 and 1.96 BB/9. As the 98th pitcher off the board, he’s available whenever you want him. He’s shown better velocity this spring (as high as 96 mph), but the results have been negative.

For most fantasy owners, Tanaka is the Yankee to watch. With a partially torn UCL, the risk is obvious. Some pitchers like Ervin Santana successfully rehab without any ill effects. After flashing an elite splitter, 9.31 K/9, 1.39 BB/9, and a 2.77 ERA last season, he’s easily the highest ceiling Yankee hurler. The NFBC crowd is wary, drafting him 30th overall among pitchers. Without the UCL injury, he would be in the top 10.

Pineda returned to action last year after missing two seasons to shoulder surgery. He flashed plus stuff with a fastball, slider, and changeup mix. The offspeed stuff is plus, and the fastball plays up. In his return, he allowed a 1.89 ERA with 6.96 K/9 and 0.83 BB/9. He wasn’t overhyped this past offseason, so he’s available right around Michael Wacha and Ian Kennedy (37th overall).

When the Yankees acquired Eovaldi for Martin Prado, the talk was all about his blazing 96 mph fastball. Over a four year big league career, he’s failed to develop useful secondary stuff. His slider is adequate. It’s just not enough. The Yankees have him working on a splitter. As the 96th pitcher off the board, he’s a decent breakout candidate.

While the club awaits the recovery of Ivan Nova from Tommy John surgery, they will probably use some combination of Chris Capuano, Adam Warren, and Chase Whitley. Capuano will miss the start of the season with a quad injury, which could affect the bullpen depth chart. Warren was originally tabbed for seventh inning duties, but now he’s a favorite to make the opening day rotation.

For the entirety of draft season, fantasy owners have assumed Betances will close for the Yankees. Manager Joe Girardi has remained tight-lipped, saying only that no decision has been made. He has alluded that the rotation could affect the bullpen. Reading between the lines, if Warren opens in the rotation, there may be fallout in the ninth inning.

Betances performed well in a multi-inning role last season. With a 97 mph fastball, knockout curve, 13.50 K/9, 2.40 BB/9, and 1.40 ERA, Betances earned a spot among the best relievers in baseball. Warren was expected to take his place as a multi-inning reliever. If he’s not available for relief, it’s possible the Yankees will prefer to close with Miller so Betances can continue to work multiple innings.

This spring, Betances’ velocity is down to 94 mph, so there is already cause for concern. It’s yet another reason why the door could open for Miller. The lefty annihilated the competition with 14.87 K/9, 2.45 BB/9, and a 2.02 ERA. Based on last season’s results, either pitcher is probably a top 10 closer. Betances is fifth off the board, while Miller is 31st among relievers. I consider Miller a slight favorite at the moment, which makes him a potentially massive value.

The offense is built around a number of brittle players. Alex Rodriguez, Mark Teixeira, and Carlos Beltran could produce value, but they’re more likely to crowd the trainer’s table. Beltran strikes me as the most deserving of a flier. Catcher Brian McCann ran afoul of the shift last season. He’s a good power play, but his 106th ADP seems too pricey.

One perennially injured Yankee – Jacoby Ellsbury – is ranked among the top outfielders in baseball. With a 22nd overall ADP, the only path to profit is a fully healthy season. When he’s on the field, Ellsbury contributes a slew of stolen bases with slightly above average numbers in the other four categories. He’s already dealt with a minor ab injury this spring.

While I love his five category fantasy profile, I’m wary of his health history. Some analysts are worried about his power numbers. I expect the short right field porch to continue boosting his production. He’s a better target if he continues to hit third for the Yankees.

If you want a more affordable version of Ellsbury, give Brett Gardner a try. He hit a career high 17 home runs last season after never reaching double digits. He’s a reasonable bet to swipe 20 to 25 bases. He’ll leadoff most days, so he’ll produce more runs than RBI. The NFBC folks are taking him 145 overall – right after Leonys Martin. Given his home park, I’m not too concerned about power regression.

I was pleased when the Yankees re-signed Chase Headley. The former Padre was rejuvenated by his new offense friendly home. In 224 plate appearances with the Yankees, he slashed .262/.371/.398 with six home runs, three stolen bases, and solid run production. I expect more of the same in 2015 with a line around .260/.350/.405, 15 to 20 home runs, and a handful of stolen bases. He’s the 20th third baseman off the board – 235th overall. His expected production looks very similar to Manny Machado – and he’s going 130 picks before Headley.

If you’re in a sufficiently deep league, don’t be afraid to give Didi Gregorius a look. He’ll have an everyday job. As a lefty swinger, he has enough pop to hit over 10 home runs at Yankee Stadium. His overall production won’t be inspiring, but it should be good enough in a deep, 15 team format.

The Yankees are the 14th franchise in our power rankings. The veteran club is characterized by rebound and breakout candidates. As such, the upside is among the best in baseball. With so many questions to be answered, it’s much easier to see the downside.

Some options like Sabathia, Eovaldi, and Headley represent potentially massive values. They’re not without risk, so look at them as fallback plans. For now, the rotation has adequate depth. Many assume the bullpen is settled, but Miller could play fantasy upset sometime in the next few days.