The Mets are supposed to be pivoting back towards contention, but it’s clear that the franchise is still a financial wreck. A club in their market should easily exceed a nine figure payroll, but they’ll likely stay under the $100 million threshold for a third straight season.

The team made a few minor additions over the offseason, most notably Michael Cuddyer and…John Mayberry. While the Mets could compete, it already seems like they’re putting their eggs in the Matt Harvey basket. Zack Wheeler caught Harvey’s illness and will miss the 2015 season. While they have plenty of depth to absorb the loss, they already need everything to break right. 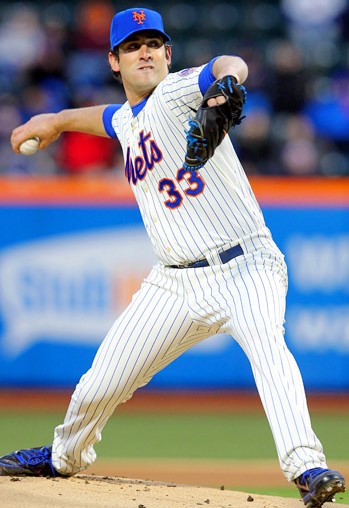 Colon may be the opening day starter, but we’re all waiting for Harvey Day. Harvey has mangled the competition this spring while demonstrating the stuff that made him a fantasy stud from 2012 through 2013. The Mets claim he’s unrestricted, but look for them to find excuses to push back his starts and call upon early relief. I anticipate about 28 starts and 175 innings.

If it weren’t for the Mets’ likely restraint, Harvey could be a top 10 pitcher. His excellent 96 mph fastball is complemented by a plus slider, curve, and change. It’s rare that a pitcher can combine so many plus pitches. He’s currently the 15th pitcher off the board, but he’s trending up. The price makes him a little risky.

Back in December, deGrom started to appear in sleeper articles. December’s sleepers are March’s overhyped assets. I happen to still like deGrom’s price tag. He’s the 27th pitcher and 114th overall. That said, there is very little room for profit.

The hype around deGrom stems from a good five pitch repertoire. His 94 mph fastball draws strong results because it’s complemented by a good sinker, plus-plus change, and two effective breaking balls. In his debut, he pitched to a 2.69 ERA with 9.24 K/9 and 2.76 BB/9. The peripherals all appear to be repeatable. Expect a slightly higher ERA and a tiny bump to his 1.14 WHIP.

The rotation depth chart includes three notable prospects – Noah Syndergaard, Rafael Montero, and Steven Matz. All three have the ability to take the league by storm, but it’s also worth tempering expectations. Young pitchers can scuffle in their first taste of major league action. Syndergaard (aka Thor) is destined for a place in the rotation. Montero and Matz aren’t locks to remain starters, but they seem to have the necessary stuff. At some point, Gee will cede his spot or somebody will land on the disabled list.

The Mets have said Parnell will close when he returns to action. The latest update from Parnell himself indicated that he’s targeting early May. I have trouble believing the job will be available when he returns.

The trouble with Parnell is that he was never very good. Sure, he managed three sub-3.00 ERAs, but he did so with nothing but velocity and ground balls. He’ll turn 31 later this season, so it’s fair to wonder if he can come back with his old 95 mph heater and movement.

In the interim, Mejia is a perfectly viable closer. He’s relies on a cutter, although he also works in a plus slider and curve with some frequency. Very rarely, he’ll also use a change or sinker. The cutter is effective, but it’s not elite. That limits his ceiling. All of his pitches allowed a high BABIP, which makes me wonder if he was hanging pitches or just unlucky. Obviously, you don’t want your closer throwing cookies.

Offensively, the Mets took the good with the bad last year. David Wright and Curtis Granderson scuffled. Meanwhile, Lucas Duda mashed 30 home runs, and Travis d’Arnaud flashed mid-lineup potential in the second half. The team is looking for rebounds from Wright, Granderson, and Cuddyer while hoping for continued growth from less established players.

The table setter is Juan Lagares. He’s remained incredibly sleepy throughout draft season. He’s expected to hit first as the club’s everyday center fielder. There’s a chance he’ll be the most valuable Met, although a lot of his value is tied up in elite defense.

Lagares isn’t a prototypical leadoff hitter. His walk rate hovers below five percent. He does have enough speed to hit for a decent average. Last year’s numbers included a .281/.321/.382 line with four home runs and 13 steals. He should score 80 to 90 runs atop the order, and he’s talked of stealing more bases. He’s virtually undrafted, which makes him a nice fallback plan in deep leagues.

Of course, Wright is the big name to follow. Injuries led to the worst season of his career. He hit just .269/.324/.374 with eight home runs and eight stolen bases. It’s fair to wonder if the 32-year-old can rebound. His offseason routine was interrupted by rehab, which could affect his ability to survive a full season.

A healthy Wright is a five category monster. He’s currently being drafted 10th among third baseman – after Kris Bryant and pick 100. With even a mild recovery, he’s a steal. Unfortunately, we can’t just assume health. His spring training stats do provide some degree of optimism – he’s hit .303/.324/.606.

While my expectations for Cuddyer are somewhat less than sanguine, a 249 ADP seems to be taking things a little too far. We have to account for the move from Coors Field to CitiField, yet it still seems as though he can provide some production across all five categories when healthy. He’s a frequent guest of the trainer’s table, so plan to have a spot on the disabled list handy.

Wilmer Flores draws terrible defensive reviews. Don’t worry; they’re overblown by catastrophizing Mets fans. Bizarrely, they’ve infected his ADP. This is an excellent opportunity for fantasy owners. The 357th pick has eligibility at second and shortstop. He won’t steal bases, but he does have 10 to 20 home run power and could hit for a plus batting average. If he gets hot at the right time, he might work his way ahead of Wright in the order. The Mets really dislike Ruben Tejada, so Flores’ job is safe.

The Mets are the 16th team in our power rankings. The rotation is top heavy, but it also has depth. The lineup could be a potent force, but there are too many brittle components to rely upon it. In all likelihood, the training staff will be overburdened with a stack of injuries. They have an uphill battle if they want to top the Nationals. Thankfully, the Braves and Phillies could help their Wild Card chances.

Fantasy owners apparently hate the Mets, so there are plenty of sleepers among their hitters. Lagares and Flores could come out of nowhere to provide decent, late-round value. Wright’s getting older and coming off his worst season, but he may still make for a wise investment.