To some, it can be surprising to see a 78 win projection next to the defending AL Champions. The club performed poorly in free agency – at least by FanGraphs’ measures. Edinson Volquez is seen as a below average pitcher, and he’s replacing James Shields. In the lineup, Alex Rios and Kendrys Morales aren’t anticipated to provide much positive value. There is upside with all three players, but the downside is easier to see.

The team has positive components that could allow them to outperform their projections for a second consecutive season. The bullpen is a nightmare for opposing lineups, which helps to mitigate a mediocre rotation. In tight games, manager Ned Yost can comfortably relieve his starters after five innings. They also have one of the best fourth outfielders in baseball in Jarrod Dyson. He gives the club a lot of flexibility in the outfield even as he saps fantasy value from those he replaces. 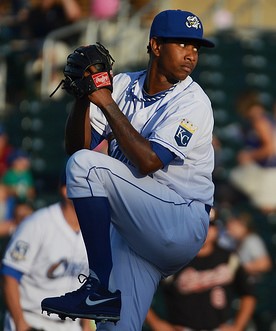 The Royals rotation is very nearly a fantasy black hole. There are spot starts to be had, but only one name must be rostered in mixed leagues.

This time last year, Ventura was a fantasy deep sleeper. Now he’s the Royals’ ace. The righty averages 98 mph with his fastball. He also throws a hard sinker, cutter, curve and change. The sinker wasn’t particularly effective. It was hit hard, and several of his other pitches produced similar ground ball rates. If he’s checking PITCHf/x data, he may downplay the pitch this season. Keep in mind that we’re dealing with small samples.

The biggest concern with Ventura is his endurance. Since he’s undersized (listed at 6’0”), scouts and analysts aren’t sure he can handle 200 innings on a regular basis while maintaining his blazing heat. While there is something to the concern, the same was once said about Pedro Martinez. Until he actually lands on a disabled list, I recommend assuming his health risk is no different than any other pitcher. NFBC owners are selecting him 150th overall with Hyun-jin Ryu (now injured) and Lance Lynn.

Duffy has rolled over the competition in his last 30 starts (split between 2013 and 2014). The lefty often struggles with control. Believe the mediocre strikeout and walk rates, not the 2.53 ERA. Let somebody else swallow the eventual implosion.

For depth, the Royals have hired fly ball specialist Chris Young, and Tommy John recovery specialist Kris Medlen. Young can be ignored in all but the deepest fantasy formats. Medlen could be of interest when he makes his midseason return. His best pitch is a changeup.

Holland is a top five reliever by any measure. He’s not the top gun only because Aroldis Chapman and Craig Kimbrel are even more unfair. Holland combines control with lethal stuff. His 96 mph fastball is a plus, but it’s his elite slider that allows him to dominate. The pitch induced whiffs on 58 percent of swings last year – marking it as one of the top sliders in baseball. He has a career 2.19 ERA with 12.47 K/9, and 3.24 BB/9. He’s been even better in recent years. Be wary, his velocity is down three mph this spring. It could easily be nothing or a symptom of a problem.

Davis offers a different look. He throws a fastball, cutter, and curve. The cutter is nearly unhittable. A 1.00 ERA with 13.63 K/9 and 2.88 BB/9 allowed him to outperform many closers in fantasy leagues. He didn’t allow any home runs in 72 innings – a feat we shouldn’t expect to see replicated. Expect some regression across the board, but he should remain a very useful fantasy handcuff.

Herrera also pitched well with a 1.41 ERA, 7.59 K/9, and 3.34 BB/9. From a fantasy perspective, the hype outstrips reality. A 99 mph average fastball is great. Since he often pitches to contact with a 98 mph sinker, he doesn’t record many strikeouts. Without strikeouts or saves, his fantasy value is limited. He has the potential to breakout, but he’ll probably continue to focus on weak contact. Like Davis, he allowed zero home runs in 70 innings. Expect to see some long balls.

The success of the 2014 Royals was shocking in many regards. The offense eschewed the commonly accepted modes of production. By many measures, they were the least powerful team in baseball. They also had the lowest strikeout rate. A preponderance of contact allowed the club to score at a league average rate despite decidedly below average individual performances.

The postseason also included big numbers from Lorenzo Cain, Eric Hosmer, and even Mike Moustakas. October heroics don’t always translate to the regular season, so be careful when investing. In years past, a guy like Cain would have soared up draft boards after hitting .333/.388/.417 in October. Fantasy owners are smarter these days, but Cain still has some draft helium. He’s being selected 50th among outfielders with the 198th pick. Joc Pederson, Adam Eaton, and Khris Davis have similar acquisition costs.

The problem with Cain is that he’s a low power hitter. There are plenty of successful hitters who pop fewer than 10 home runs a year. That success is predicated on contact. Cain carried a relatively high whiff rate, which dampens his ceiling. The .301/.339/.412 line he posted in 2014 was supported by a .380 BABIP. While he doesn’t make a lot of free outs, he shouldn’t be expected repeat the high average. He’ll initially hit third, but expect that to change by mid-May.

Hosmer is one of the hardest players to evaluate. His skill set runs completely counter to most first basemen. He can steal over 10 bases (he didn’t last year), but he offers little in way of power or run production. His fantasy slash last season was a miserable 54/9/58/4/.270. Owners were hopeful after a breakout 2013, but he succumbed to regression. There’s no question the 25-year-old is a breakout candidate, but it’s so easy to bet on Adam LaRoche, Brandon Moss, and Brandon Belt to outperform him.

Perez, 25 in May, offers stealthy value for two catcher leagues. There are problems with his plate approach. He’s kind of like a bad version of Pablo Sandoval. He features above average power and run production for the position thanks to a high plate appearance total. He is extremely durable, but that can change quickly with catchers. He’s currently the 111th player off the board. It’s hard to justify the opportunity cost. Mookie Betts, Jorge Soler, J.D. Martinez, and Chris Carter are usually available later in the same round.

You may have noticed a theme among the hitters. There are things to like, but their ADP places them with better players. The same holds true for Rios and Alcides Escobar. You can use late-round picks to acquire Mike Moustakas and Kendrys Morales. I don’t recommend targeting them despite late-draft availability.

The Royals are 17th in our power rankings. Remarkably, the team is much more than the sum of its parts. There are plenty of useful fantasy players, but their acquisition cost mostly outstrips their value. An exception is the bullpen, where Holland and Davis are probably worth every penny.

Even though the ADP data says the hitters aren’t a good bargain, don’t cross them off your list. Most Royals hitters are trending down as more analysts put forth similar opinions to mine. There is a point where guys like Cain, Hosmer, and Perez provide ample value for their cost.