This is my favorite roster. The lineup is well designed for the home park which heavily penalizes right-handed power hitters but benefits lefties. Cleveland has seven viable starting pitchers including two Cy Young candidates. The bullpen is merely adequate, but a few shifts to the roster could improve it. The AL Central is a heavily contested division, but Cleveland has the components to break away from the pack. 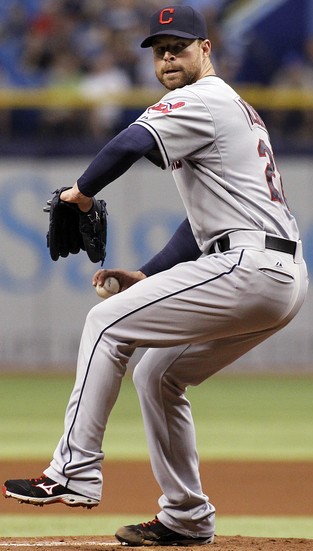 The rotation is Cleveland’s biggest strength. Kluber is coming off a Cy Young season in which he rolled over the opposition to the tune of a 2.44 ERA, 10.27 K/9, and 1.95 BB/9. All of those numbers appear repeatable. He relies on a sinker which only rates as average in PITCHf/x. It’s his cutter and slider where he excels. The cutter is a 70 grade pitch while the slider is between a 60 and 70. Command and control work in his favor. He’ll also mix in a plus changeup.

It’s not a popular point of view, but the new Carrasco is probably a better pitcher than Kluber. A stint in the bullpen taught him how to aggressively harness his wicked stuff. The result was a 2.55 ERA with 9.40 K/9 and 1.95 BB/9. Some of that came in relief, but he was even better upon a late season return to the rotation.

His repertoire is telling. Not only does he throw a 96 mph fastball, he also tosses three borderline elite offspeed pitches. Per FanGraphs’ Eno Sarris, Carrasco’s slider is the second best thrown by any starting pitcher (Clayton Kershaw tops the list). His changeup and curve feature only slightly lower whiff rates than the slider, and they induce a 74 percent ground ball rate. At the very start of draft season, Carrasco was a bargain. Hype inflated him to his current price tag as the 28th overall starter. He’s still a steal at 113 overall.

Much to my chagrin, an injury to Gavin Floyd and the demotion of Danny Salazar allowed McAllister to grab a rotation job. My angst is due to his relief profile. His 94 mph fastball plays up to 97 mph and his curve is borderline elite. As a starter, he’s much too reliant on his fastball to be anything but ordinary. As a reliever, his ceiling is comparable to the best names in the industry. McAllister is a viable stream starter against the right opponent.

House is a simple pitcher. He mixes frequent sinkers with occasional sliders and changeups. Like most sinkers, the pitch is rather hittable. The offspeed stuff is average or slightly better. In a 12-team mixed league, he’s right around the border between full time rosteree and waiver wire streamer.

Salazar and Josh Tomlin are two of the best depth pieces in baseball. Salazar was a big fantasy sleeper last season, but he stumbled out to a slow start. This time around, the Indians are proceeding cautiously before bringing him up the majors. He has the stuff to be a fantasy weapon.

Tomlin is a better fit for the rare K/BB league. His fastball is extremely hittable, which is why he posted a 4.76 ERA. However, he has good secondary pitches including a cutter, curve, and change. They’re all average or better. His command and control allow his repertoire to play up. Last year, he struck out 8.13 K/9 with 1.21 BB/9.

After outwaiting John Axford’s attempted career revival, Allen stepped in as a true relief ace. He notched 24 saves with a 2.07 ERA, 11.76 K/9, and 3.36 BB/9. As the eighth reliever off the board, he’s the last of the elite talents available. Those after him like Trevor Rosenthal, Joaquin Benoit, or Andrew Miller all have some overriding concern. If there’s one complaint about Allen, it’s that he’s a fly ball pitcher. That could get him into occasional trouble against left-handed hitters.

If the Indians have to reach beyond Allen, it better be McAllister. The other internal options are short term patches at best.

The Indians lefty heavy offense should provide plenty of firepower, although the club might struggle against tough southpaws like David Price. The home park is friendly to lefty home runs with a 118 park factor (18 percent above league average for home runs). Righty power is diminished by 14 percent.

Many fantasy owners want to know what to expect from Michael Brantley. After a handful of mediocre seasons, he exploded to a .327/.385/.506 line with 20 home runs and 23 stolen bases. The average wasn’t a surprise to anyone thanks to a high contact approach. The power is a different story. Prior to 2014, his career high in home runs at any level was 10 (set in 2013).

There are reasons to expect regression in his home run total, but 15 should be within reach. His swing has always had nice leverage –personally, I expect a repeat of 2014. He’s been on my breakout list for years due to his five category profile. He’s ensconced as the third hitter, so his run production should remain excellent. Barring injury, the floor is somewhere around 90/10/80/20/.290.

Over the winter, Cleveland acquired Brandon Moss from the A’s. The lefty slugger has hit over 20 home runs in the last three seasons despite playing his home games at the Coliseum (76 park factor for LH power). He battled a hip injury last season, but appears to be at full health. Switching parks should give him a shot at a 30 home run season.

His role with the club could support a 100 RBI season. Both Brantley and Carlos Santana are high OBP hitters. Moss is likely to hit immediately after them. He’s improved his platoon splits to the point where he can play against lefties. All the same, don’t be surprised to see him sit against tough southpaws.

Santana’s days of catching are behind him, but he still has catcher eligibility in Yahoo leagues. He also has third base eligibility on all major platforms. He’ll be in the lineup nearly every day as a first baseman or designated hitter. That position flexibility is quite valuable, especially if you can use him as a catcher.

He’s a low average hitter and will only steal a few bases. However, he’s capable of hitting 25 to 30 home runs. The presence of Moss should assure good run production. Since he’s only a three category hitter, his 75th overall price tag is based on his versatility.

If you’re looking for a sleeper, turn to Jose Ramirez. With top prospect Francisco Lindor looming, fantasy analysts have given Ramirez short shrift. However, he’s a superb defender and reasonably decent hitter. The club will find a way to play him, even if that means bumping Lonnie Chisenhall to the bench or Jason Kipnis to the outfield. Available after the 300th pick, Ramirez doesn’t have to do much to be a value play. You can pencil him in for five home runs, 25 steals, and a .265 average.

The Indians are the sixth team in our power rankings. They have it all – multiple aces, rotation depth, a relief stud, and a powerful, high OBP lineup. They’re my personal pick to win the AL Central. Most of their players are very modest bargains, although there are also a few true sleepers like Ramirez.