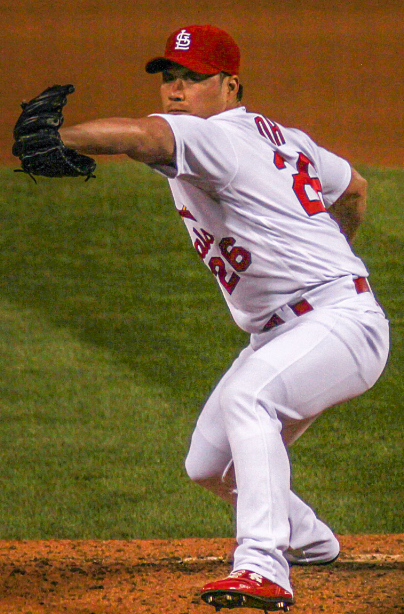 Cody Allen has been the big talking point over the last week, especially with newly acquired Andrew Miller in town. He has been a little up and down, and obviously his outing against the White Sox was the biggest blowup we have seen from him in quite some time. Miller has been in the setup role for Cleveland, so holds and strikeouts are what we will see out of him for the most part going forward. No real difference from before.
The Cardinals are in an awesome situation with Seung-Hwan Oh, who has eight saves, and a sub two ERA this season. The walk to strikeout ratio continues to be superb, and he should remain in that role throughout the season. Kevin Siegrist and Jonathan Broxton still sit behind him, with little value. Fernando Rodney has also been a little up and down, but closing out four games for Miami since being the closer is going to offer some value. If he is out there in your league, give him a look.
Wade Davis and Huston Street remain the injured closers, although Street hasn’t been that impressive when healthy. Fernando Salas continues to close out games, while in Kansas City, this is a repeat situation of Kelvin Herrera closing out game. He is doing a fine job at it as well. Street has begun throwing, but with a month and a half of baseball left, there really isn’t any need to keep him on your watch list. Especially with a career low strikeout rate, and a 6.45 ERA. Salas hasn’t been much better, but did pick up his third save this week. So if you are desperate, he is an addition to look at.
August has not been friendly for Sam Dyson, who has blown three saves already. Dyson wasn’t particularly attractive for an option to close, given his low strikeout rate, but the fact he rolls a ton of ground balls helps him out quite a bit. Jeremy Jeffress and Jake Diekman both loom in the waitings if the struggles continue. This could be a situation to keep an eye on.