The Red Sox are favored by many to win the AL East. However, the roster has one big whomper of a flaw. The offense should easily pace the league. Not only is it potent, it’s ridiculously deep. They’ll need the offensive firepower.

The rotation lacks any standout talents. Their best pitcher is Rick Porcello, and he’s a league average hurler. The rest of the unit is comprised of upside plays. Individually, they’re fine players to roster. When the four of them comprise four-fifths of the rotation, there is a problem. The bullpen isn’t much better off. Ancient closer Koji Uehara is already slated to miss time with a hamstring injury.

Woof. This is not a place you want to go for fantasy ratios. When healthy, these pitchers should all post high win rates thanks to fantastic run support.

Porcello is a decent pitcher. He has a six pitch mix. The entire repertoire grades out around average with the exception of his below average four-seam fastball. He has superior command and control, but no strikeout pitch. He should maintain something around a 3.50 ERA with 6.00 K/9 and 2.00 BB/9. He’s a better fit for H2H owners since K/9 matters less.

After flashing a potential breakout in 2013, injuries sidelined Buchholz for the second half of that season and derailed his 2014. His spring strikeout rate is encouraging (18 K in 15 IP). Buchholz has never made 30 starts, but he’s worth monitoring early in the season. If his strikeout rate remains above 8.00 K/9, he might be worth rostering.

The theme continues with Miley, Masterson, and Kelly. They all have the potential to become mixed league relevant. They are capable of decent strikeout rates, and we know they’ll win games. Until we get a better look at them, they’re nothing more than late-draft fliers.

Fans of the knuckleball should be pleased to see Steven Wright on the cusp of a rotation job. If the club needs early season reinforcements, he should be first in line.

Beyond Wright are two high ceiling prospects. Henry Owens reportedly has an advanced repertoire with improving command and control. He’s struck out over a batter per inning at every minor league stop. He’ll open the season in Triple-A where he’ll be joined by Eduardo Rodriguez. He has a mid-90’s fastball. His breaking stuff flashes plus, but he needs to find more consistency.

Uehara fell apart late last season, and he continued to scuffle this spring. Now, a hamstring injury has him headed to the disabled list. When he’s right, his splitter ranks up with Joaquin Benoit’s as one of the best in baseball.

Another splitter specialist, Mujica, will fill in for Uehara. He pitches to contact, which isn’t ideal for fantasy owners. While Boston will win a lot of games, it wouldn’t be surprising to see long stretches without a save opportunity. Mujica’s best skill is a low walk rate. Otherwise, he’s very marginal for fantasy purposes. 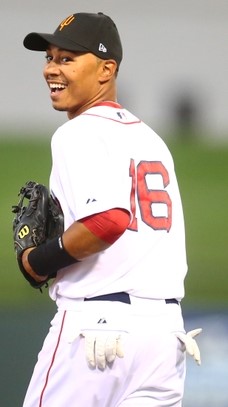 Have I mentioned the offense is very good? Boston relied on rookies last season and it backfired. This year, they could provide the fulcrum of the offense.

Mookie Betts is expected to lead off. He’s hitting .467/.500/.867 this spring with just three strikeouts in 48 plate appearances. Despite putting everything into play this spring, Betts actually has good plate discipline. Combined with decent power, speed, and a high contact rate, he could be a fantasy monster. A 110/15/65/25/.290 season isn’t out of the question.

He’s been climbing draft boards all spring with a current ADP of 108. I typically see him drafted around 55th overall, and I’ve personally considered him as early as 40th (I tried to wait until pick 57 and he was taken). The above cited line is a top 20 talent, so he’s still a modest value. Yahoo leagues give him second base eligibility.

After Betts are a slew of reliable veterans. Dustin Pedroia, David Ortiz, Hanley Ramirez, Pablo Sandoval, and Mike Napoli form a potent heart of the order. The entire unit offers on-base skills and plenty of power. Sandoval could be a steal at pick 125 after moving from hitter-hating AT&T Park. I foresee a boatload of doubles.

Napoli is an interesting gamble after offseason surgery for sleep apnea. Ostensibly, better rest should allow him to play at a higher level than recent seasons. He’s the 23rd first baseman off the board with pick 250. It’s not hard to picture a 25 home run season with 70 runs and 80 RBI.

Sophomore Xander Bogaerts will find himself with a low-pressure role in the offense. Like the rest of the team, he should benefit from the high powered lineup. I expect a modest improvement to around .260/.320/.410 with 15 home runs and a handful of steals. Along with decent run production, this is a solid line from a mid-round shortstop.

One last situation to watch is the interplay between Shane Victorino and Rusney Castillo. Early in the spring, the club stated that Victorino would start. His play has been lackluster while Castillo shines. Castillo brings an explosive offensive profile with plus defense. He appears to be an easy two win upgrade over Victorino. It’s hard to set a firm projection for the Cuban, but a full season could include 20 home runs, 20 steals, and a .280 average. He’s probably a better fit for the two-hole than Pedroia, but don’t expect to see him in that role until midseason at the earliest.

The Red Sox are the fifth club in our power rankings. The top offense in baseball will need to fire on all cylinders to counteract a weak pitching staff. The rotation is a problem, but the bullpen could be a nightmare. Midseason trades will be necessary to reinforce the pitching depth. The club has proven resistant to acquiring top talent like Cole Hamels.