After winning a division best 96 games, projection systems do not expect the Orioles to repeat. The lineup should continue to mash despite the departure of Nelson Cruz. It’s the pitching staff that could leave the club high and dry.

The Orioles have made a habit of outperforming expectations under manager Buck Showalter and GM Dan Duquette. The folks at FanGraphs have conducted countless studies attempting to determine if Baltimore has discovered some secret formula to success. In the most recent analysis, Jeff Sullivan examined projected win totals versus actual wins. The Orioles have won 44 more games than expected in the last three years – fueled by an “unprecedented” 2012. Other clubs with similar performances have not continued to win more games than projected.

Is it possible the Orioles have discovered some sort of Holy Grail that allows them to outperform expectations? Certainly, it’s just not likely. At some point, their team win total will not add up to more than the sum of its parts.

This is a useful real world rotation, but the fantasy application is limited. Tillman is coming off his best campaign. The perceived “ace” posted a 3.34 ERA, 6.51 K/9, and 2.86 BB/9 in 207.1 innings. Advanced metrics like FIP, xFIP, and SIERA estimated an ERA between 4.01 and 4.26. Tillman has outperformed ERA estimators in each of the last three seasons (499.2 IP), so there’s cause to expect a repeat.

Of particular note, he generates a lot of weak contact which leads to a low average on balls in play. Fantasy owners would like to see him add more strikeouts to his game. As an organization, the Orioles dislike cutters. It’s also Tillman’s most effective pitch. If he strikes out more hitters, it’s probably because he buffed his cutter usage. He’s relatively cheap as the 71st pitcher off the board.

There is plenty to like about Gausman’s profile. A 95 mph fastball headlines his five pitch repertoire. Like other Baltimore pitchers, his strikeout rate (career 7.66 K/9) is disappointing. He seemingly possesses the ingredients for much better numbers. His splitter is his second most frequently used pitch, and it generates a 21 percent whiff rate (borderline elite). For Gausman, the key to better numbers could lie in using fewer fastballs. He turned to the heater over 70 percent of the time. His 2014 numbers – 6.99 K/9, 3.02 BB/9, and a 3.57 ERA – were pedestrian. Nevertheless, there is breakout potential.

The Orioles must decide how to use Ubaldo Jimenez. The pricey free agent import scuffled in his first season with the O’s. He posted 8.33 K/9, 5.53 BB/9, and a 4.81 ERA. Those who watched him know his stuff remained filthy. His issue was throwing strikes. Jimenez claims to be feeling healthier. If he’s also hitting his spots, he could emerge as the Orioles best starter.

Dylan Bundy returned from Tommy John surgery last season. He features mid-90s heat, a plus curve, and a plus-plus cutter. He should reach the big league level at some point this season. Like with most 22-year-olds, expect some growing pains as he adjusts to the majors.

Last year, the Orioles really needed to discover a closer. Luckily, Britton thrived in a relief role. The southpaw’s velocity jumped from 92 mph as a starter to 95 mph in relief. His sinker generated ground balls at a ridiculous 75 percent rate. It’s the second highest rate in the last 10 seasons (Brad Ziegler, 75.5 GB%). Anytime somebody does something borderline unprecedented, we should expect regression. In the case of Britton, a ground ball rate in the mid-60’s is still elite.

He elicited plenty of weak contact, which partially explains a low .215 BABIP. He leaned almost exclusively on the sinker last season. It will be interesting to see if he chases more strikeouts by turning to the slider this year.

Behind Britton are O’Day and Hunter. O’Day is typically viewed as a righty specialist. He uses a funky delivery and a deluge of sliders to keep hitters uncomfortable. Baltimore may prefer to avoid using such a gimmicky profile in the ninth inning. Hunter opened 2014 as the club’s closer, but quickly ceded the job to Britton. Another former starter, he features big 96 mph velocity but struggles to notch strikeouts. 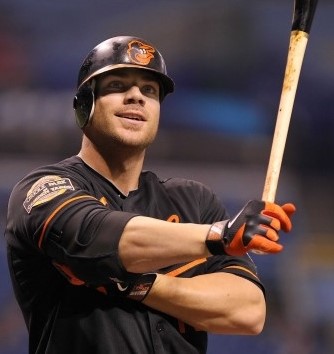 The Orioles featured one of the best offenses in the game last season. They lost Cruz and his 40 home runs via free agency, but they could recover the production elsewhere.

Baltimore’s most reliable hitter is Adam Jones. Always a free swinger, he posted the lowest walk rate of his career in 2014 – 2.8 percent. Fantasy analysts have worried about his approach for years. He survives by making high quality contact. If an injury or age should sap his bat speed, he’ll quickly plummet into the fantasy abyss. He’s just 29, so it’s probably too soon to worry. The NFBC crowd is targeting him as the sixth outfielder – I’m looking elsewhere.

Manny Machado and Matt Wieters missed most of the season, so injecting their bats back into the lineup should be a boon. By virtue of debuting at a young age, Machado has always delivered more hype than actual production. He showed 20 home run upside last season, and projection systems call for a similar performance in 2015. Perhaps he can finally avoid a knee injury.

Wieters, once hyped as the next messiah, was in the midst of a breakout season when his elbow required surgery. Be careful when buying – the boost in batting average was mostly fueled by an increase in his line drive rate. If he returns to his typical batted ball profile, his average will decline. He’ll start the season on the disabled list, so look for him well after his 149 ADP.

Chris Davis was re-approved by the league to use ADHD medication. It’s unclear if or how much the meds help him at the plate, but at least he won’t be suspended again. Despite an ugly .196 batting average, Davis still bashed 26 home runs. It was enough to keep him fantasy relevant. Infield shifts will continue to cut into his batting average, leaving him as a two category producer. Fantasy owners are picking him between Prince Fielder and Joey Votto.

Keep an eye on J.J. Hardy during spring. A back injury completely short-circuited his reliable power bat. He says he’s healthy once again, which could make him a useful 30 home run threat at the thinnest position in baseball. His ADP of 262 means he’s available whenever you want him.

The Orioles are the 13th team in our power rankings. The rotation is an obvious weakness from both a real world and fantasy perspective. Tillman and Gausman could break out, but it’s hard to bet on such events before they happen. Bundy is one of the best pitching prospects in baseball. He bears watching.

The lineup should be effective yet again. It’s hard to handicap players like Davis, Machado, Hardy, and Wieters. They could all be core performers or better at their respective positions, yet it’s hard to completely discount their recent history.